Software projects produce artifacts—a concept less particular than package which has a version, manifest and structure conforming to some package system. Package systems are smart, and thus complex. The key feature of an artifact is that it is dumb.

Package management is a hard problem, with lots of half-broken systems serving particular ecosystems: Cargo for Rust, pip for Python, NPM for node.js, Maven for Java. Artifact systems are not so well-studied, though the concept is high-leverage: unlike package systems, an artifact system can:

To design a system there are two options:

This essay describes the simple solution.

Storing ad-hoc flags in DynamoDB or some other centralized bookkeeper(s) requires immediate and ever-accumulating coordination. Human coordination is expensive because it is tedious, high-latency, and hard to verify.

Robust simple systems can be used as substrate for more complex systems:

If you use an infrastructure service like AWS, it is the lingua franca of your organization: your tools, services, and developers all speak it. boto and S3 are the least-common-denominator of capabilities. A blob on S3 can be fetched by web browser, curl, or a REST client.

We can use AWS S3 to build a serverless, API-less, decentralized artifact source.

The system has four concepts:

Artifacts are stored in S3. All artifacts for all projects (yes, all) live in the same S3 prefix (folder), which contains a flat list of unique ids corresponding to the DVCS revision:

Because a DVCS revision is reasonably unique (SHA), there’s no need for any human to tend to a garden of folders (“this project goes here, that project there…”). It is important that the list is flat: this means that existing tools won’t need updates to understand how to traverse the artifacts, and humans can reason about the system to use and extend it without coordination.

When a commit is pushed to a project, the metalogic immediately puts a “stub” metafile at the artifact address. The stub is the first metafile found in any ancestor. Each address has a parent and ancestors defined by the VCS. (The parent is stored in the metafile so that traversal of the artifact addresses is possible without querying the VCS.)

When a build finishes, it uploads its artifacts and re-runs the metalogic, which re-generates the metafile.

Before a build finishes, the previous artifacts can be used, by inspecting the metafile (which contains a map of artifacts to addresses). 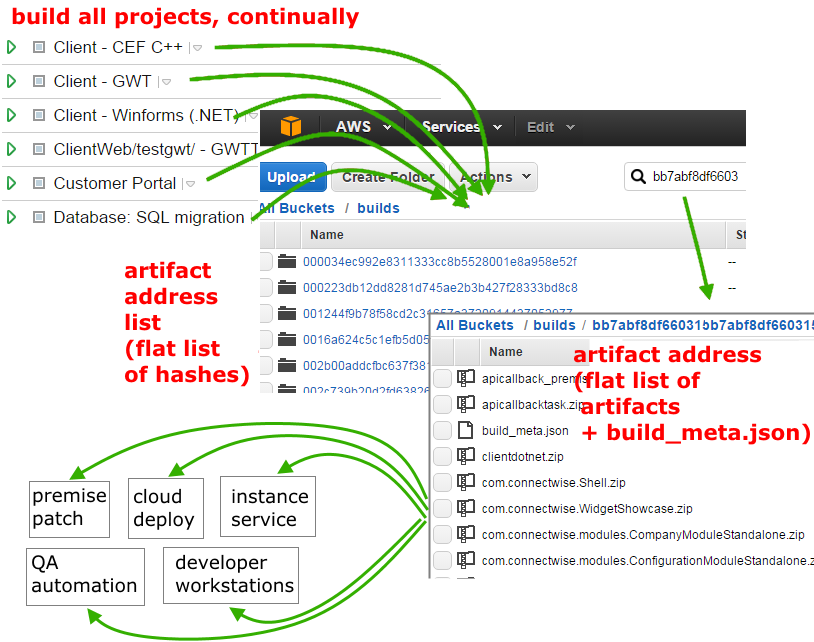 where <hash> is the VCS revision for that project. All projects store their artifacts in this flat list of addresses.

Artifacts can be retrieved at any time in the future for deployment or inspection.

We defined artifact address as a snapshot of the project output for a given DVCS revision. From that snapshot we should be able to deploy or install the product. But each snapshot may be “sparse”: it contains only artifacts that actually changed, and the missing artifacts are resolved by looking at the ancestor addresses. If a build wasn’t triggered to produce an artifact, we assume that the “nearest” ancestor artifact can be used in its place. Missing artifacts are resolved by following the parent address until all artifacts are found (see Metalogic).

The flattened result of the resolved artifacts is stored in the metafile build_meta.json. (It’s just JSON, called “the metafile” for brevity.) Here is the metafile structure:

In the above sample, the apicallback_premise.zip artifact was built at the current commit. In contrast, cef.zip is resolved to some ancestor (not the immediate parent in this case).

The build_meta.py script is called the metalogic, a small (~200 LOC) python script that generates the build_meta.json metafile.

A key feature of the metalogic is that it must be safe to run at any time (idempotent). Various hooks may run it at any time, without fear of causing some undesired state. The VCS runs the metalogic immediately at every commit, in order to “stub” the metafile immediately so that any dependent system may assume that the metafile for any valid VCS revision always exists (even though its resolved artifacts will be that of its nearest ancestor). Every build runs the metalogic after the build finishes, regardless of whether the build currently produces artifacts or not (because projects change often, and they may start producing artifacts at any time).

Only known artifacts are allowed. To emphasize predictability and reduce ambiguity, the metalogic raises an error (fails the build) if it sees an unknown artifact. This ensures that artifacts are never missed, because the artifacts list is updated immediately to avoid the build error.

Here’s a sample log of the metalogic after a build, resolving missing artifacts by checking the artifacts and metafiles of ancestors:

An artifact system, like a package system, is not purely a technical problem: it derives in part from a common understanding which may change in your organization over time. By embracing that informality, we can build a useful system with minimal effort.

The future of package management and artifact resolution demands a more sophisticated approach that eliminates the need for ecosystem-biased solutions: describe dependencies meaningfully, instead of the underspecified heuristics of traditional systems. Rich Hickey presents a way forward in “Speculation”.